A couple months back,  I finally took my Amature Radio Technicians exam. The exam location nearest me gave the exam for free, and with only 35 questions it doesn’t involve copius amounts of studying.

One of the things that’s interested me the most is APRS. Using Xastir, one can track mobile and static APRS stations in your area. 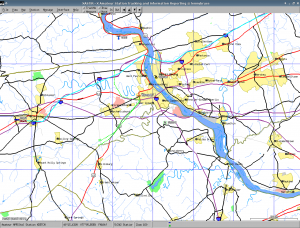 There’s some interesting stuff out there – in my area there’s a trucker (N6GVG) that I’ve followed, making runs from West Virginia, to Tennesse, to Pennsylvania, and from there to New Jersey. (I’m a HUGE fan of Open Transport Tycoon Deluxe, if you’ve not played it – seriously, get it. I only wish American trains were equiped w/ APRS) 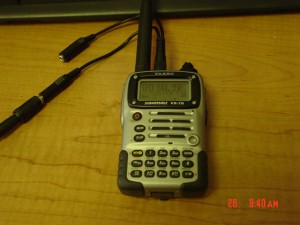 With the amature license in tow (KB3TCN), I decided I’d start sending out my own beacons. Problem was, I couldn’t figure out how to interface my soundcard (I’m using soundmodem) with the Yaesu. I’d already purchased the CT-91 cable from ebay (it splits out from a 4 tipped 3.5mm plug to a 3.5mm headphone plug and 2.5mm mic input), but simply connecting the soundcard to the mic input (using an adapter) didn’t work (and was probably incredibly stupid to try). Doing so keeps the radio keyed, and I’m sure is bad.

After talking to the gang on freenode:#hamradio and looking at the manual for TNC connection, it turns out the solution is fairly simple – two interfaces utilizing various isolation transformers (see http://www.qsl.net/wm2u/interface.html for a good intro, I’ll post my modified schematics shortly… I actually wrote this post months ago)

The optimal voltage is 5mV with 2kohms of resistance. My circuit gets it pretty close (btw, I can’t take responsibility for any harm this circuit causes, use at your own discretion. Seriously, don’t trust my judgement – this is how I change a car tire).

Anyway, it’s working for me. I had to pump the soundcard output up pretty high, but I’ve got my beacon reportedly seen by others. (It’s been a few weeks since I’ve transmitted, as my next project is to do a PIC based tracker for my car)