It was a year ago this month that I received a comment on the braindeadprojects  site from a user named quotaholic.

Quotaholic had also picked up a WebpadDt  with the hopes of expanding upon it’s capabilities. My initial goal was a cheap touchpad screen for a car-pc. Quotaholic was thinking about bigger possibilities – and built himself an entire community site. 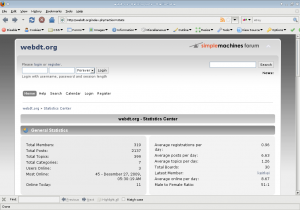 While I don’t necessarily agree with some of the goals of the site (I personally don’t understand the point of testing to see which Linux distro’s will run on the webpad – and would like to see the community get behind one distro and build releases specifically aimed at the webpad)… the level of ambition is amazing.

I’ve not had much time to continue with the webpad on my own. Quotaholic however, has released a 100M version of Debian Lenny with the LXDE Desktop Environment geared towards the webpad (penmount drivers working and all)

So what am I doing with my DT now? Using it to stream audio (over my wireless) to my kitchen stereo. And the Gentoo Image that I’ve put a lot of work into? Well, that filesystem is on my storage server while I use Quotaholics release.

One thought on “Happy Birthday webdt.org!!!”